I Googled an ExBoyfriend and the results were shocking!

Now you and I have seen those "shocking" headlines all over the World Wide Web.  Usually nothing is really "shocking"; it's just clickbait.  But this really was a nasty surprise! 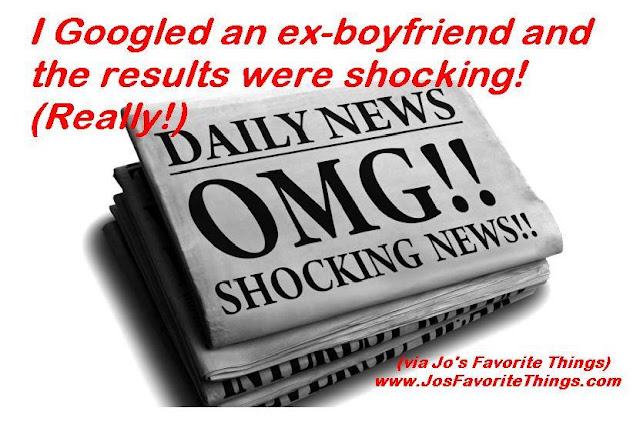 "I wonder what happened to so-and-so.."


That's the magic of the Internet.  We may actually be able to follow up on people who left our lives years ago, decades ago.  Old friends, lovers, ex-husbands and wives....  We may be able to find them if we really want to reconnect with them.

Or we may just, early one morning or late one night, decide to Google someone.. not necessarily anyone we have any interest in talking to.. just to see where they are now.  Just because we are curious.. or nosy.. or both, as I'm not sure of the difference.

So that's what happened to me early yesterday, Sunday, when I was up with the dog.

A name came into my head; the name of a man I dated briefly 40 years ago.  I hadn't thought about this man for years.  He wasn't a "boyfriend" (despite the sensational headline); he was just Someone I Dated.  I may have gone out with him 10-12 times over the period of 3-4 months.  He was from New York; had been transferred here (to the Chicago area) by his employer.
I have no idea why he popped into my head yesterday morning at the crack of dawn.

I really didn't like him that much as a possible partner and I was relieved when he told me that he was moving back to New York.  He tried to call me years later when I was happily involved and he was "in town on business".  I had no interest in seeing him.

I checked Facebook first; no hit.  Then I Googled his name with the state "New York" after it.

And there was a cascade of hits, almost all of them pointing to the same event.  As I started to follow those links, I first thought, "No, it can't be."  But...

Was this man with the same name the same man?

I still wasn't sure this was the same man that had taken me to discos and interesting restaurants in the 70's; the same guy who tended to call me up at the spur of the moment; the same guy that drove old sports cars that were constantly breaking down (so that we often took my old 1966 Chevelle on a date); the same guy that my mother absolutely did not like at all; the same guy that I really suspected was married because I never saw him on Saturday nights.

He claimed he had a "second job" as a bartender on Saturday nights despite his really GOOD job as an engineering manager for a Fortune 500 company.  (Yes, he did have that "good" job; I did see his office late one evening.)

About those Google hits...  I started reading one after the other, all going back to an incident, a really disturbing incident, in 1990. The essayist/novelist Joan Didion wrote a piece that included this incident, and that essay, after appearing in the New Yorker in the early 1990's, was cloned everywhere.

So.. was this the same guy?  First of all, this wasn't a really common name, and sites like White Pages and some of those people finder pages had very few people with that last name, much less the combination of first and last.  And in New York/New Jersey area?  Well.. there seemed to be only one person in the NY/NJ area with that name.  Could that be?

The age was about right.  He was in his mid 40's back in 1990.  The job was somewhat in the right field; he was listed as a New York building inspection official back then.  I looked and looked for pictures so I could confirm that this was indeed the same man, but I found none.

What was so "shocking"?

So what was the "shocking" thing this Man I Dated did back in 1990?

He rolled up his dead girlfriend in a rug and put her body out with the trash.

He was apparently married and had a house in the suburbs, but he had a girlfriend.. and an apartment... in the city.  The young woman was younger than he; quite a bit younger, about 15 years younger. (I was only 8-9 years younger than he was.) From the various accounts, the girlfriend had some problems; she apparently was a drinker and had a history of taking pills, including the pain killer Darvocet and Valium.

One day in his apartment (after she had been dating him about a year), she died from a combination of alcohol and Darvocet.  He claimed that he didn't realize she was dead until the morning and he panicked (as he was a married city official), so he rolled her body up in a rug, put her body out with the trash, and then called 911 from his office.

I'm not going to include a link because I don't want to reveal the name of this man just in case this man was not the Man I Dated 40 years ago.  Anyone who is an experienced Googler will be able to find the whole story.  Joan Didion wrote about the "situation" in an essay called "New York:  Sentimental Journeys."  She wrote about the story of this young woman put out with the trash as a contrast to the well-publicized story of the Central Park jogger who was supposedly attacked and raped by several young teen-age minority men.  (They were later exonerated in 2002.)

Some New York stories involving young middle-class white women do not make it to ... the front pages. In April 1990, a young middle-class white woman ... age twenty-nine still living with her parents... die(d), according to the coroner's report from the accidental toxicity of Darvocet in combination with alcohol, in an apartment ... in Manhattan. The apartment belonged to the man she had been...  seeing for about a year, a minor assistant city commissioner....  (The man was) married to someone else.  (He) wrapped (the young woman's) body in a blanket; placed it, along with her handbag and ID, outside the building with the trash; and went to his office... At some point an anonymous call was made to 911.

(The man) was identified only after her parents gave the police his beeper number, which they found in her address book. ...  Initial police reports indicated that there were no visible wounds on (her) body. But (the young woman's mother) said ... that the family was told the autopsy revealed two "unexplained bruises" on her daughter's body.

(The parents) said those findings seemed to support their suspicions that their daughter was upset because they received a call from their daughter at 3 AM Thursday "saying that he had beaten her up." The family reported the conversation to police.

"I told her to get into a cab and get home," (the woman's father said). "The next I heard was two detectives telling me terrible things."

"The ME [medical examiner] said the bruises did not constitute a beating but they were going to examine them further," ...

"There were some minor bruises," a spokeswoman for the office of the chief medical examiner (said later)..., but the bruises "did not in any way contribute to her death." This is worth rerunning: a young woman calls her parents at three in the morning, "distraught." She says that she has been beaten up.

A few hours later, ...between Madison and Park Avenues, a few steps from Porthault and Pratesi and Armani and Saint Laurent and the Westbury Hotel, at a time of day in this part of New York 10021 when ...  the construction crews are clocking in over near the Frick at the multi-million-dollar houses under reconstruction for Bill Cosby and for the owner of The Limited...  A few hours later, this young middle-class white woman's body, showing bruises, gets put out with the trash.

In fact nothing did come of the death of (the young woman), which might have seemed a natural tabloid story but failed, on several levels, to catch the local imagination. For one thing she could not be trimmed into the role of the preferred tabloid victim, who is conventionally presented as fate's random choice (The young woman) had, for whatever reason, taken the Darvocet instead of a taxi home, her parents reported treatment for a previous Valium dependency.  She could be presumed to have known over the course of a year that (the man) was married and yet continued to see him; for another, she seemed NOT to have attended an expensive school or to have been employed in a glamour industry (no Ivy Grad, no Wall Street Exec), which made it hard to cast her as part of "what makes this city so vibrant and so great."

In August 1990, (the man) pleaded guilty to a misdemeanor, the unlawful removal of a body, and was sentenced ... to seventy-five hours of community service. This was neither surprising nor much of a story... , and the case's resolution was for many people a kind of relief. The district attorney's office had asked for "some incarceration," the amount usually described as a touch, but no one wanted, it was said, to crucify the guy: (The man) was somebody who knew a lot of people, understood how to live in the city, who had for example not only the apartment on between Madison and Park but a house in Southampton and who also understood that putting a body outside with the trash was nothing to get upside down about, if it was handled right. Such understandings may in fact have been the city's true "ultimate shriek of alarm," but it was not a shriek the city wanted to recognize.

Could the man I dated back in the 1970's be the kind of man who beat a woman and later put her body out with the trash?

I pondered this for a while, but my answer is "yes".

I did something "wrong".

I don't remember what horrible thing I supposedly did, but I remember what seemed like a very dark veil coming over his face and I remember him looking at me with eyes that had turned very steely and cold very quickly.  He actually yelled at me about whatever I did or said, but then said it was OK and not to do it again.  I remember thinking that I needed to be cool, to not react, but to get out and get out fast.  Which I did.

He was then away back in New York on business for a week or two, and then he called me for one last breakfast in a local coffee shop to tell me he was moving back permanently.  A breakfast seemed safe and that was it; I don't think I ever saw him again.  Which was just fine with me.

Trust your instincts?  If the guy seems creepy he probably is?  Don't date married men?  Don't date men that you suspect MIGHT be married?  Don't date men who only date women years younger than they are?  Be glad that your dating days are behind you (if they are)?

Carry a dime if you need to make a phone call?  (Oops.. that was my mother's advice to us back in the 70's.  Perhaps the modern version is:  ALWAYS carry your phone and make sure that it is ALWAYS charged. And sign up for Uber so that you can make fast getaways if necessary?)

Trust your instincts:  If the guy seems creepy, dump him.  Fast.

And those of us who managed to get through our dating years without being beaten, hit, or rolled up in a rug and tossed out with the garbage should count our blessings.