The first places to welcome 2015 will be Samoa and Christmas Island and the small country of Kiribati (the former Gilbert Islands). The New Year is coming to those small countries in the middle of the Pacific in (as of 11:38 p.m. Chicago time) 4 hours and 24 minutes, which is 20 hours before we will welcome 2015 in Chicago, in the Central Time Zone.

You can watch the world turn to 2015 at this link:

Time left before the New Year around the globe!


Actually, the whole Time and Date website is full of interesting tidbits.  I'm surprised I never came across it before.

Holiday appetizers... Use those crescent rolls you bought on sale!

We just bought a big package of Pillsbury Crescent Rolls on sale at Costco, and I wasn't sure what to do with all of them.  But this Crescent Ring looks delicious and it would be a great holiday party appetizer... or even a full meal with a salad:

This is one of many recipes (many from Pillsbury) posted by various Skinny Fiber weight loss people.  I must say that most of these recipes don't sound like anything you'd eat if you were really serious about losing pounds, but they sound good to eat.  This one sounds great, particularly around the holidays with so many people doing so much entertaining!

This crescent ring is loaded with all the delicious flavors of an Italian sub, great for serving at parties or during busy weeknights.


Other additions, suggestions, and substitutions:

Here are some comments from readers for making this work better... or just changing things a bit:

All of these comments? From the Pillsbury article itself and from here: 5,000 comments on Facebook can't be wrong!
Posted by Jo at 9:27:00 AM No comments:

Email ThisBlogThis!Share to TwitterShare to FacebookShare to Pinterest
Labels: recipes

No More Roundup: Weeds Away!

An environmentally-friendly answer to weeds in patios and walkways?


Get rid of weeds in patios and in edgings without using harmful, poisonous Roundup or other herbicides!  (Though the photo below, from Beaufort Online, names this recipe "Weed-Be-Gone", please be aware that there is an Ortho herbicide on the market named "Weed B Gon".  The following recipe is NOT the same product.)


This recipe was found on Facebook via Beaufort Online: 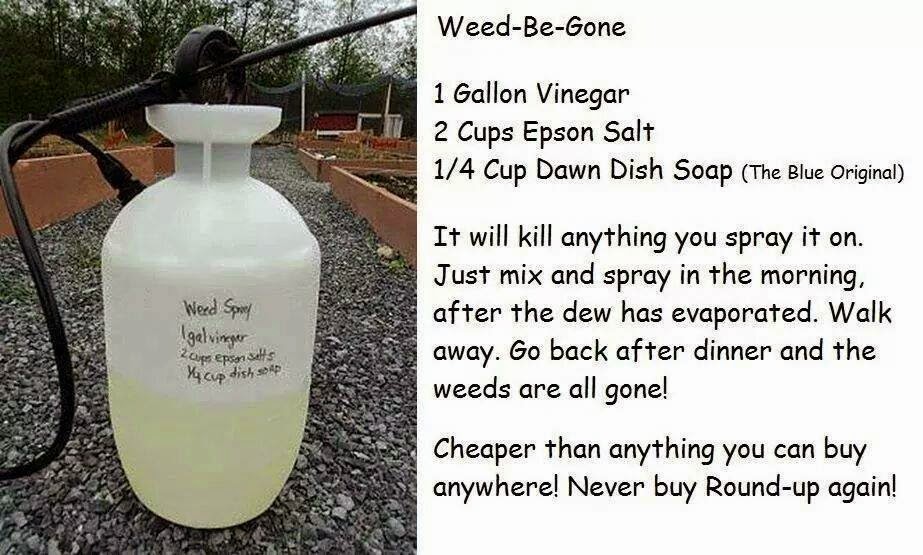 Don't need a gallon?  Check below for a conversion to a smaller quantity.  And the common salt is called EPSOM salts, not EPSON.

Great discussion of the pros and cons of this recipe at the link.  The crux of the controversy is whether or not Dove is needed and, if so, whether or not it is also a dangerous product due to the policies and procedures of its creator, Proctor and Gamble.  First, use only Dove blue original, nothing anti-bacterial; second, Dove blue, the product that I bought does not contain phosphates.  If you are still concerned about Proctor and Gamble's products or issues such as animal testing, etc., (which are real concerns), you might want to try substitutes or see if this product works WITHOUT the Dove at all and report back.  Based on the comments, some weedy plants do contain oils, and the soap in the Dove will get rid of that.

Other people want to make it clear that this recipe will kill all plants with which it comes in conrtact, so don't use it in a flower or vegetable bed.

So.. If you want to try this, but you don't need a gallon of it, try this reduced recipe:
My review:  I did try this, and it did work... to some extent...

However, I needed much more than the reduced recipe I printed above just to do a few weeds that popped up between my patio blocks.  Initially I just used a spray bottle, but ultimately, I just poured the stuff on the weeds.  That did the trick for most of the weeds, but it took several days before I noticed any effect.  I did a second batch for the stubborn weeds that didn't succumb the first time.


Finally!  This long, miserable winter may....just may.. be over.


And Daylight Savings Time in 2015 starts Sunday, March 8th!  One less hour of sleep that night, but one more hour of sunlight Sunday evening. Enjoy! 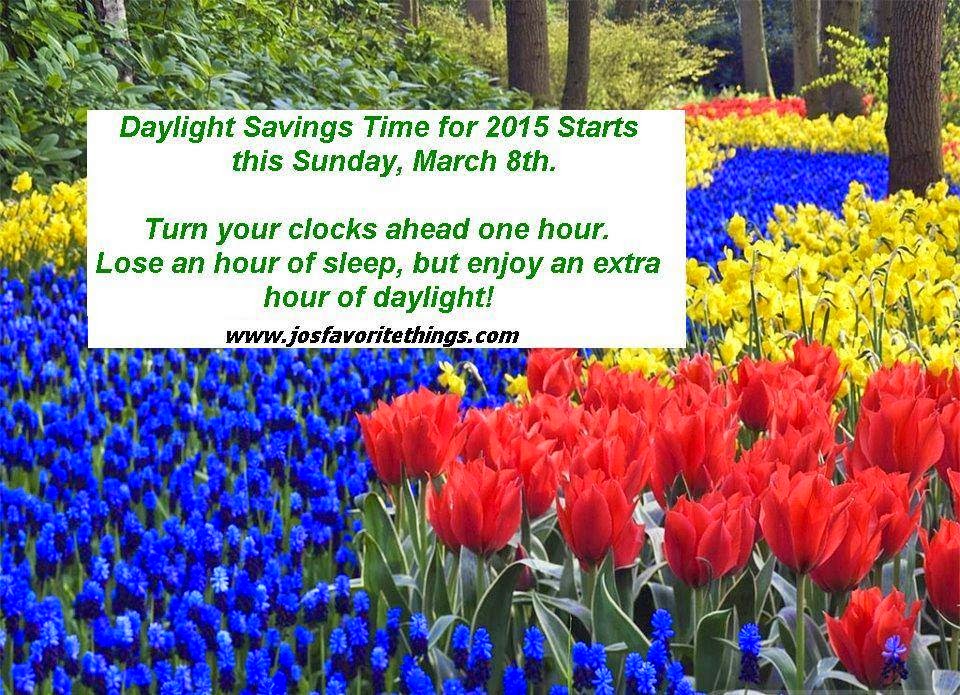 Turn your clocks FORWARD Saturday night, March 7th, before you go to bed.  Spring ahead!!
Posted by Jo at 4:47:00 PM No comments: