February 9: Pizza, Bagels, and the Beatles!

It's snowing in the Midwest and that snow is supposed to be heading East. We may get 10 or more inches in Chicago. If you live in the Midwest or the Northeast, you may get a snow day.. or you may be able to work at home or leave early. That would be a nice way to celebrate February 9th! 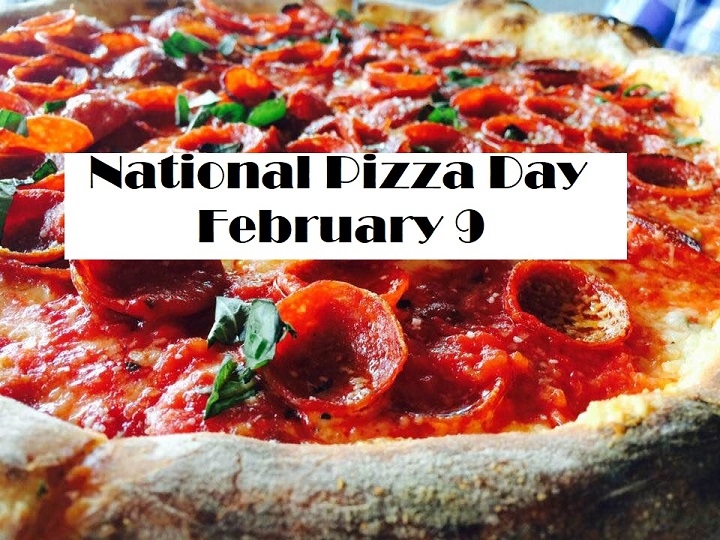 If it is too snowy, you can celebrate National Pizza Day (see below) by popping a pizza in the oven, or, better yet, getting a pizza delivered, that is, if the roads are clear enough to let the pizza delivery guy get through.

Is your birthday today?

If you were born on February 9th, you share your birthday with:

Your birthstone is the beautiful lavender amethyst . (Ancient Greeks believed that the stone protected the wearer from drunkenness and enabled them to keep a balanced mindset.) You were born under the sign of Aquarius. (I can't help hearing that song "The Age of Aquarius" whenever I write that.) I hope you are having a Happy Birthday!


How many hours of daylight now?

The sun rose this morning at 6:53 a.m. local Chicago time and it will set at 5:16 p.m., about two minutes later than it set yesterday.  We have two minutes and 29 seconds more daylight than we had yesterday.  (Other cities?  Continue below.)


We have 10 hours, 22 minutes, and 6 seconds of daylight today, so we've added back 1 hours 15 minutes of daylight since the Winter Solstice on December 21st.
Countdown to Daylight Savings Time

One of my friends has been counting down the days until we return to Daylight Savings Time and get back an hour of evening light.  I can't say that I blame her at all.  That will happen on ---
Sunday, March 11, 2018, meaning we have 30 more early evenings until sunset in Chicago, today at 5:16 p.m., jumps to 6:52 p.m.  We will then have about 1 hour and 14 minutes more daylight in total than we have now -- and 2 hours and 35 minutes more daylight than we had on the Winter Solstice on December 21, 2017.

Oslo is much farther north than Chicago.  Whereas Chicago has 10 hours and 22 minutes of sunlight today, Oslo only has 8 hours and 41 minutes of sun today.  The sun won't rise until 8:10 a.m. Oslo time, and it will set by 4:52 p.m.  Their days are getting longer, but they still have very dark long nights.

Detroit, just a bit north of Chicago, has 10 hours and 20 minutes of daylight, only about 2 fewer daylight minutes than Chicago.  The sun rises at 7:36 a.m. Detroit time, though, almost an hour later than it rises in Chicago, so the sun doesn't set on Detroit until 5:56 p.m., about 45 minutes later than it sets in Chicago.

What about MY city?

You can search for your city HERE at the sunset/sunrise lookup of the TimeAndDate site.

How Many Days Until...

Famous people who died on February 9:

What happened on February 9th?

Several other February 9th events are listed at these links:

Anything besides pizza and the Beatles?

The National Day Calendar lists many interesting and/or weird "celebrations" for each day.  For February 9th, try National Pizza Day, National Bagel Day, National Toothache Day, and National No One Eats Alone Day.  Personally, I'll take the pizza and the bagels.  I don't want to celebrate toothaches.  But I do like the idea of "no one eats alone", so ... invite someone to eat with you (either at home or out) who lives by themselves!

Check out this link for interesting facts about pizza, bagels, toothaches, and "National No One Eats Alone".  Now you have an excuse to order a pizza for dinner tonight!  And find some old Beatles clips to watch on You Tube:  Either that treasured 1st performance on Ed Sullivan or the movie A Hard Day's Night.
Posted by Jo at 6:14:00 AM